The Scene
Made my big deadline at work today. Duh. When don't I make my deadlines. Wish I felt a sense of pride or at least, relief but I don't. No end in sight to what ails me. Violins...
The best part of my day is getting home at a decent hour so that I can have dinner with my mister. He suggests exactly what I was going to suggest: our favorite Mexican place. We dine two tables away from Hollywood's tiniest Cassanova, David Spade. A few months ago I read a Los Angeles Magazine article about him called The Don Juan of Our Times. Loved the ease of the writing and the self deprecating tone. Wanted to go over and get David's thoughts about it. I am such a star fucker. 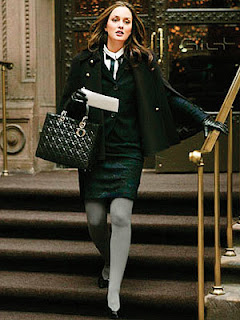 Watched Gossip Girl when I got home. Ugh. Every storyline except Rufus and Lily is mind-numbing. I am over Blair and Chuck and waaaaaay over Serena and Dan. I think I am even over - eeks - the fashion. 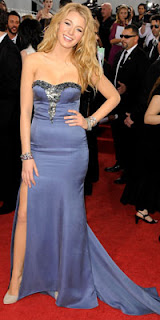 What I am NOT over is trying to figure out Blake Lively's figure. There is only one word for the fit of her satin dress last night: tragic. I recently noticed that for a skinny youngin white girl, home skillet has hips that don't lie. They are barely noticeable to the lay person's eye when she wears dresses that skim rather than hug. But they are there. Apparently she doesn't know this important factoid about dressing her figure yet. 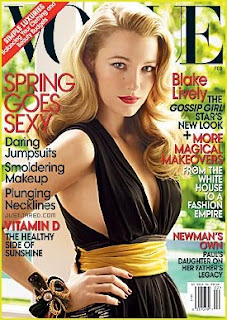 Or maybe she's in denial. The Daily reported this rumor about Blake today. Whatever the truth, I know one thing for sure: Anna Wintour has a big hard on for Blake. First she was named one of the 10 new stylemakers in December and now the March cover. Proof positive that Anna is a banana. 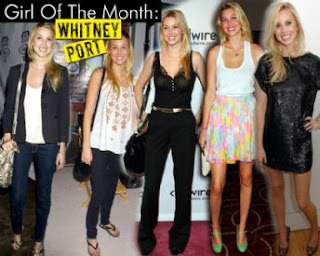 Ended the night with The City. Talk about mind-numbing. But loved the DVF cameo and Whitney's ruffle collared white jacket. Even that Jay is starting to grow on me - much to Mr. Diabolina's horror. He crushes on Whitney hard so he shows me every episode how he would like to pummel that shaggy Australian. HAHAHAH! 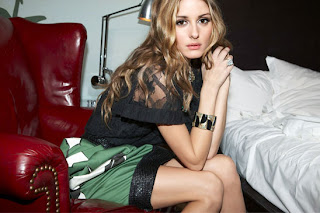 I can't even go into how much I love to hate Olivia. Wouldn't she and Spencer be PURRRFECT together? They'd spawn the anti-christ for shizzle. Work was the last place on earth I wanted to be today so I didn't put much effort into my outfit. Once again just grabbed a saturated jewel toned dress and the color of the season, yellow and was out the door. But now that I really think about it there was a lot behind the decision. No thing as unconscious dressing, remember? First and foremost, my beloved K to the B, who I saw on Saturday, is behind things. 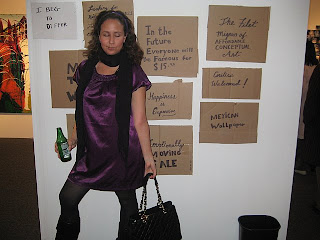 The last time I wore this dress was the outrageously fun night last January when he invited me to Art LA. 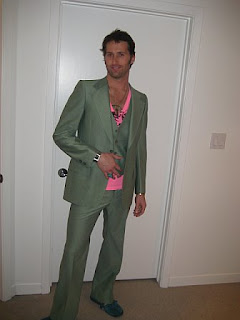 And come to think of it, he wore Saturday's suit that night too. Love interrelated fashion webs. I also had visions of MChu floating around in my subconscious from Saturday. Love love loved her jewel toned, belted mini. Her boyfriend called her Eggplant Parmesean all night. Heart. 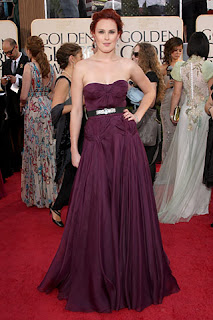 Also might have had Rumer Willis on the brain. Home girl actually cleaned up well at last night's Golden Globes in her Reem Acra dress. 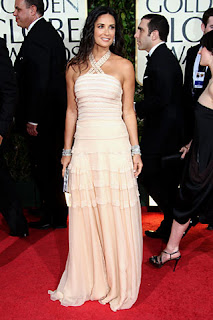 And likely because today is The City Monday I had thoughts of Whitney rattling around in my noggin. I still wake up in a cold sweat thinking about the purple DVF wrongness she doneed for the Hills Finale show. DVF did loads of purple looks for Spring. Would have loved to see Whitney in practically any other silohoutte. And though I loved the head pieces on the runway not sure they work in real life. Except maybe if you are 7 in a ballet recital.

The thought of Olivia Palermo and Spencer Pratt together is horrific.

It's always terrible when you don't enjoy going to work. At least you looked great. And your hair is looking amazing!

It's never a good thing when Audrina is the best dressed. Lauren's hair just ruined her look for me. Whitney looks like she's about to dance around a May pole...and oh god, I just noticed the neon pink/red shoes. Not her finest moment.

i love purple, but when I wear it, Fiance likes to call me "Grimace".

Just found your blog. LOVE IT!

I think that shot of Blake at the GGs should teach every woman that fit is MUCH more important than the size on the label.

totally rockin' the Lakers colors! I love it. I have an LV in that pattern as well ..I think it's the bucket bag. I usually don't bring it out til spring but I'm loving it with that look!

here's a fun david spade story for ya:

was at the farm about 10 years ago having brunch. we were talking about tv shows and i was saying how much i didn't like "just shoot me", that david spade wasn't funny, etc etc. my friend's eyes got round as hotcakes and she started shaking her head like "shut up!" i'm sure you can guess who was sitting behind me giving me the stink eye? ah yes. mr. david spade himself in his tennis whites. so ridiculous. what are the odds, seriously!

love the plum on you. you need more purple, m'dear.