What to Wear to the Women's March

The night of the 2016 election was one of the lowest lows I've felt since my daughter was born.  Ironically, it was her - beautiful, innocent, loving her - that helped me cope.

#fbf to the moment I realized Trump was going to win on Election night. i felt the tears welling up. she noticed, how she always does, and she took my face and patted it. I took a picture to remember her smile, her kindness and her innocent strength. her heart will help heal all of this horror and hatred. and suddenly my job as her guide becomes more important now than ever. #thefutureisfemale #momlife #exhausted #thankyouveterans
A post shared by Diabolina (@cheeriosandchanel) on Nov 11, 2016 at 2:12pm PST

In the days after the election, like many, I sensed a revolution was coming.   After all, I knew at least 3 million people were pissed.

one of the hardest/most beautiful things about motherhood is that even when you want to stay in bed and block the world out, you can't, you don't. a small person looks to you to live and learn and grow. so mothers, we rise, maybe brokenhearted but not broken. courage. the #revolution that so many of us knew in our bones was coming, well, it's here. and still we will rise. #momlife
A post shared by Diabolina (@cheeriosandchanel) on Nov 9, 2016 at 8:11am PST

On the stunning day of the Women's March last January, I became hopeful. Maybe this blow to women would actually help us come together, get shit done. 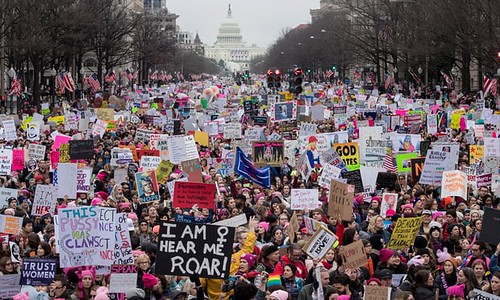 Leading up to the 2017 march, my mother disapproved of me going. She, who lived the first half of her life watching military coups, dictatorships and bloody civil war destroy her homeland, was afraid. Afraid of what a racist in the White House meant for this country. Afraid of the rage a protest by women would incite in an assaulter of women.

Your two year old needs you more than you need to protest, she stated plainly.  And I relented, mostly because I was also afraid. Afraid for her and me and my daughter. Afraid of a world seemingly turned upside down. That fear ruled me for most of  the dumpster fire that was 2017. Blech, good riddance.

Fast forward to this January as the Women's March approached again, I knew I had to go. That women's revolution I had anticipated was in full swing, the winds of change were sweeping across industries and media and generations.


Plus, the fear of the unknown last year had turned into rage over the known. This administration has assaulted everything I feared they would: immigrants, minorities, women, children, LGBT rights, the environment, affordable health care, science, education, fair elections, the justice system, and on and on. I had to make my voice heard with more than just my writing.

my beautiful brave mother at age 5 in her native guatemala. i wrote for her yesterday, for all #immigrants, for all Americans http://diabolinafashiondiary.blogspot.com/2017/02/we-are-all-immigrants.html?m=1 #resist
A post shared by Diabolina (@cheeriosandchanel) on Feb 24, 2017 at 9:01am PST

After a year of crying and feeling afraid every morning she woke up to another horrendous headline, my 68-year-old doll of a mother had changed her mind. Not only did she want to go to the march, this year, she NEEDED to. 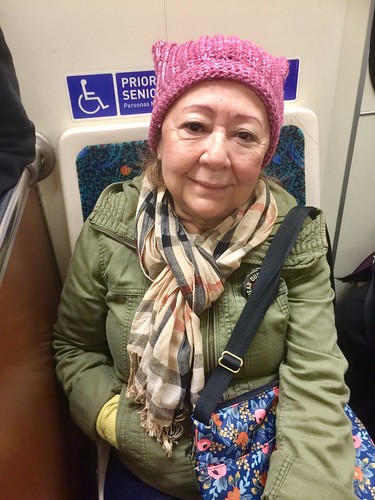 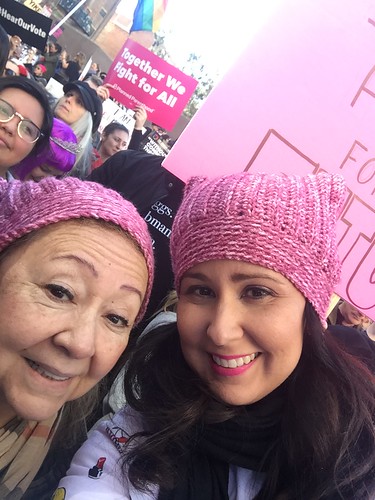 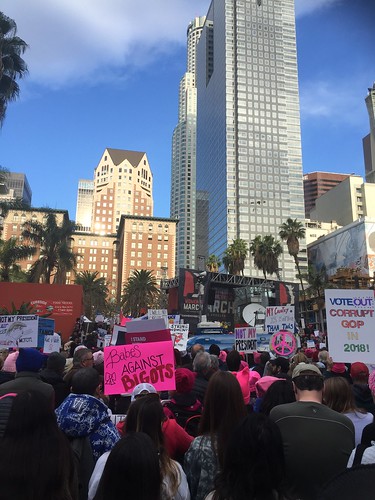 First, how creative human beings can be. I bow down. To the carefully crafted speeches that express outrage or hope...but usually some impassioned combination of both. To the genius - ACTUAL genius - signs they lovingly fashion to amuse AND inspire (some more favorites from Los Angeles Magazine here and Vogue here.) To the ways they dress and accessorize, the armor they choose for battle, the non-verbal ways they identify with a cause or a group or a shared enemy. 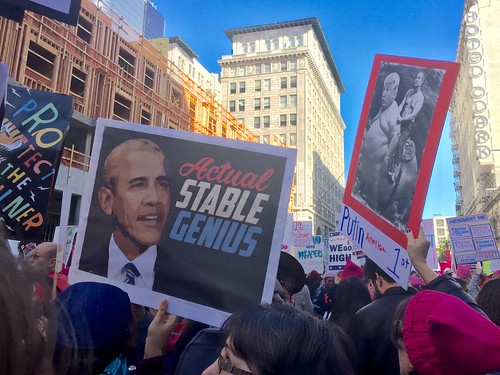 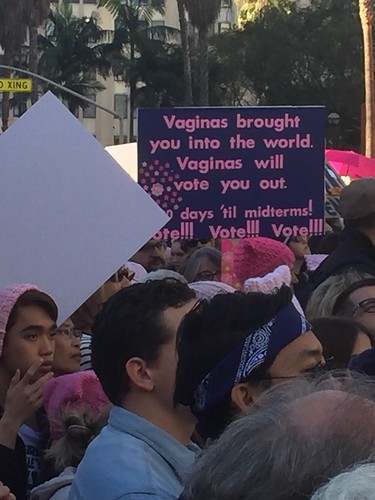 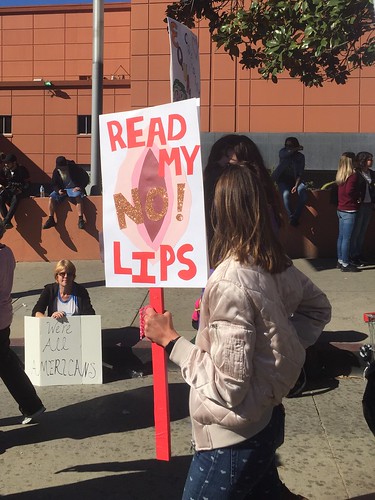 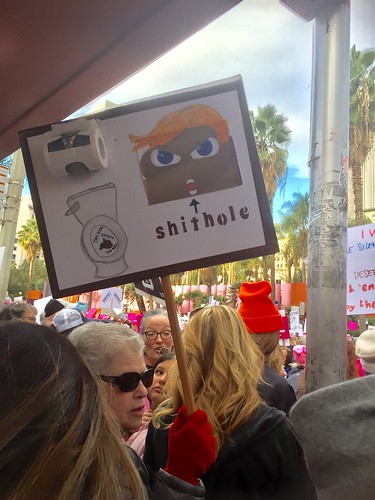 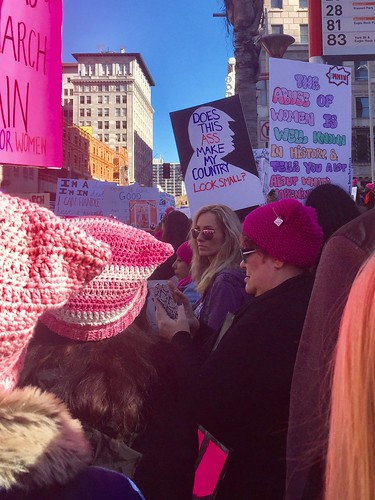 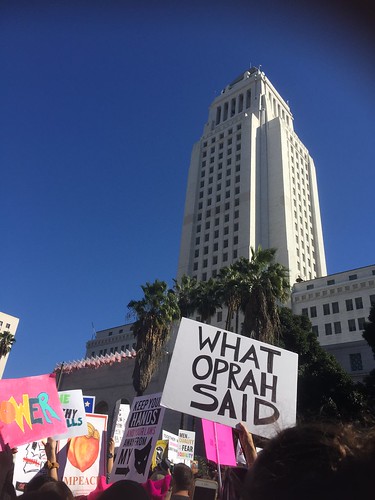 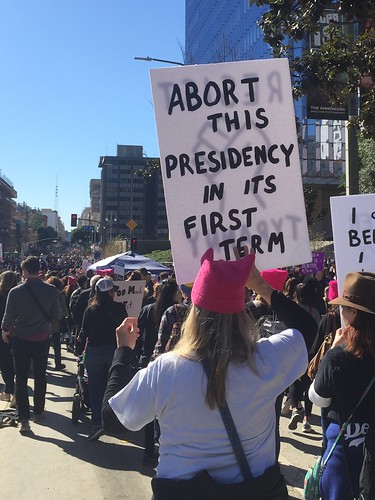 The second thing that I find staggering EVERY TIME is how kind we can be to strangers when we choose to be. In a city like LA, where we can exist in the bubble of our cars or our often racially/economically/idealogically segregated neighborhoods, it is thrilling to feel unity amidst our diversity.

To watch a sea of humanity instinctively part for a mother with a stroller, cheering her on for passing on the gift of activism. To smile at older men marching slowly but proudly in their pink pussy hats. To witness a spark ignite in a pre-teen's eyes reading your sign and see yourself reflected back, half a lifetime ago. It is all so intoxicating and affirms that we are more alike than we are different. 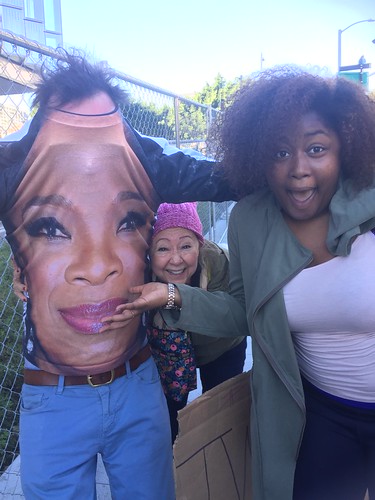 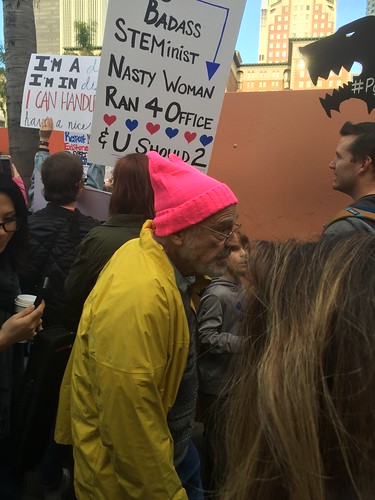 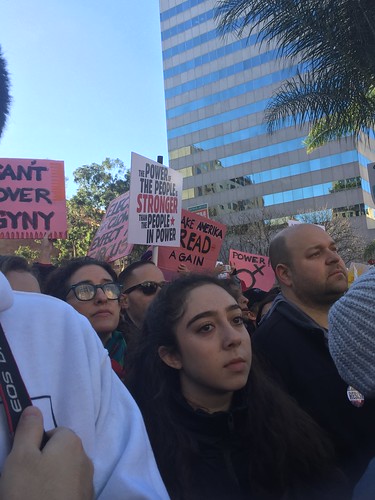 The day was elating and exhausting in ways that I expected. The one difference: my mom was with me and it was her first time exercising this constitutional right. I watched emotionally as her eyes glimmered with alternating glee and fear. I loved that she was so moved by the speeches, that she got into the chants (This is what democracy looks like!) as we marched, that she roared with laughter at the most profane signs, that she pointed out every child she saw, marvelling at their freedom. 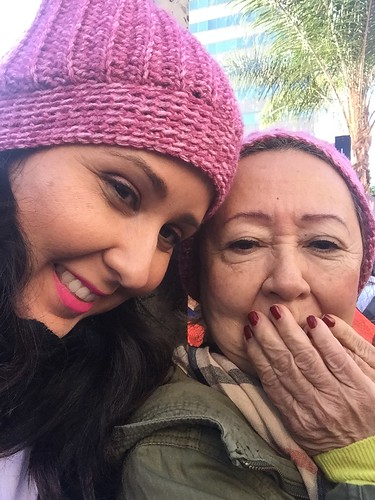 Ever since I was a Berkeley-bound, speech & debate teen nerd, I've taken this right to express my opinion and demonstrate for granted. Today, in my tiny wonderful immigrant mother's face, I saw it was something she never thought would be possible for her - despite being in this country for 40 years and a citizen for almost a decade. That's what living through an authoritarian state does to you. 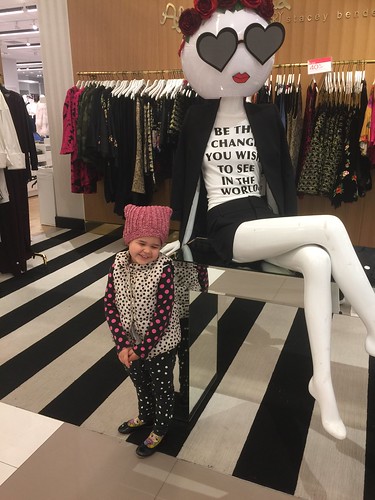 I pray she's right. I pray the wonderful speaker today who quoted Neruda is right:"'You can kill all the flowers but you can't stop Spring from coming.' We are the Spring."

The Commentary
One of the great things about exercising your first amendment right to assemble is that it's all about function over fabulous. And since Vivian was born, function has become my middle name. Fabulous has been achieved once or twice in the last 3.5 years. Le sigh.

My priorities were staying warm and being able to move quickly if need be. So I layered a hot pink sweater that makes me HOT under an H&M sweatshirt that is a staple in my mommy wardrobe (also wore it to the Pride march lso maybe it is a staple in my resisting wardrobe! btw, resisting bitch face is my favorite new pun.) 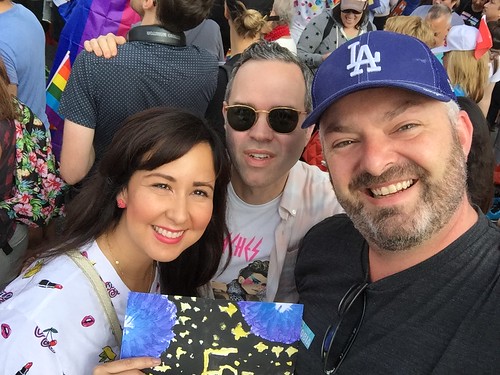 It's suffragette white and has lipstick, lips, fruit and "girl gang" all over it in that Barbie font. Vivian loves it. Made me feel like she was with me. Oh yeah and it was $8. Jeans were a no brainer. New (mom) sneakers were too. 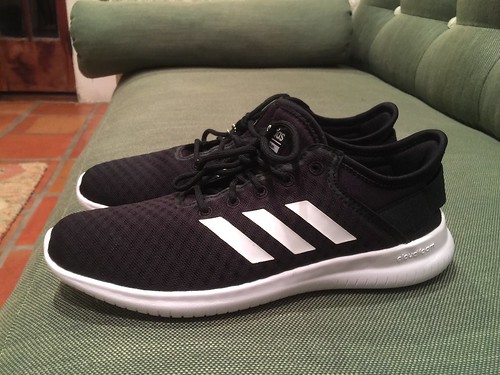 I heard counter-protestors would be out in some parts of the country so a dark scarf in case shit got real and I needed to cover my nose/face or bandage. 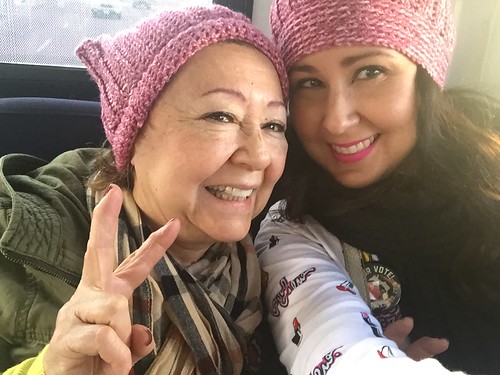 The unexpected accessory/cherry on top of the day were the pussy hats. My childhood bestie Ms. May If You're Nasty knitted the three Molinas matching ones. 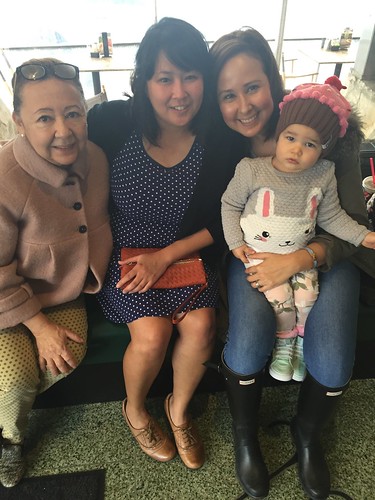 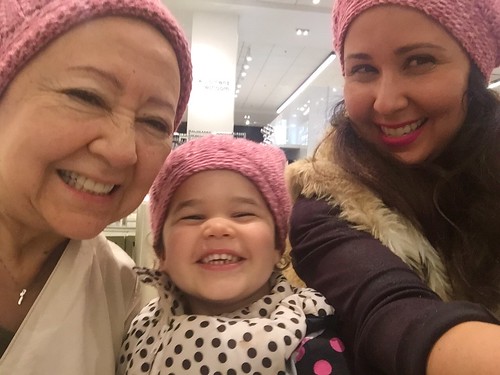 I had read over the past year that some women of color and trans women felt alienated by the symbolism of the pink pussy hats. And I get it. Don't get me started on my issues with white conservative women.  I didn't want to offend anyone who already feels marginalized.

But I was going to the march after all to honor sisterhood, especially with my own dear thoughtful friend who is also a woman of color, my mother and my child. Ultimately, I know my heart as a minority who has fought for trans kids rights for years.  At the march, I'd say about a fourth of attendees were wearing one.

Ultimately, I wish I had more time to put in effort like these Voguettes. Or be original like these ladies who won my vote for best dressed! Love a witch. 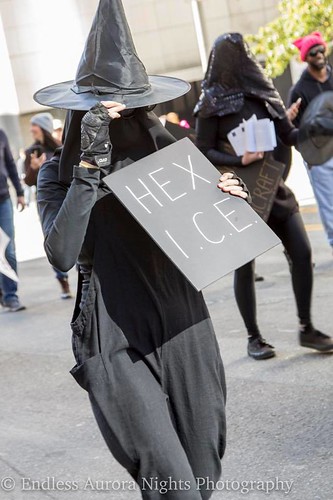 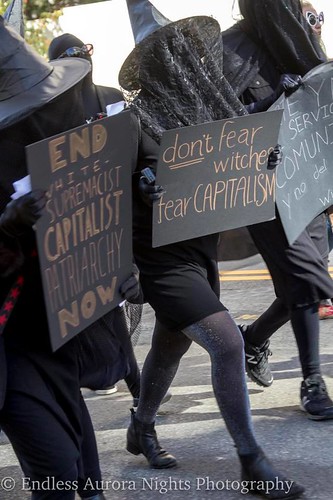 Next year, maybe V can let me borrow this look! It most closely resembles how I felt marching next to my own superhero, my mama. 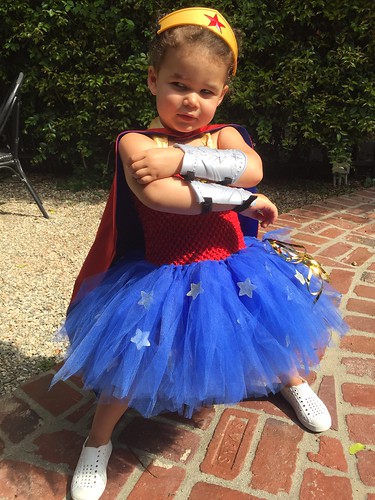 I'm already set to copy her leak below for the March for Science on April 14, Princess Elena scepter and all. 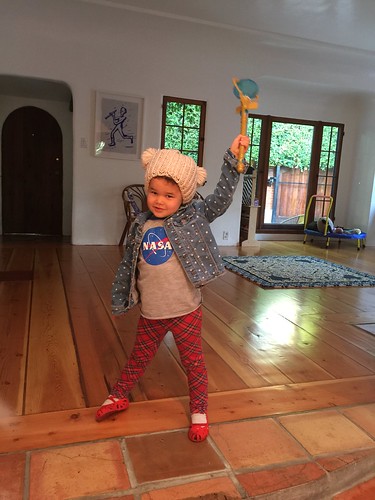 
Not that anybody asked, but one-third (95 out of 289) of all American Nobel Prizes in the Sciences have been earned by Immigrants to the United States. pic.twitter.com/DC9Nvnt9rP
— Neil deGrasse Tyson (@neiltyson) January 30, 2018

So glad you're back to blogging! xoxo

i miss you two more than eva!!