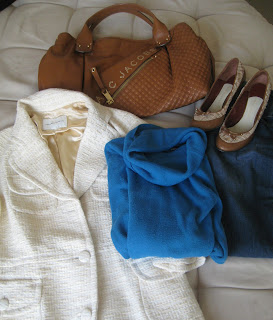 The Scene
Rush rush rushing all day at work to catch our flight to Portland in time. Didn't even take a photo of the equally rushed, non-entity of a work outfit. But here it is in all it's non-glory: Blue Cult trouser jeans, turquoise cowl necked sweater, tweed Banana coat with my MJ bag and shoes. Snore! 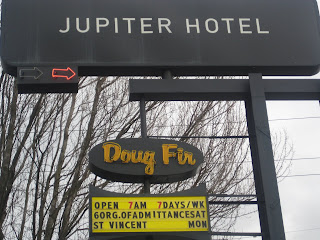 Get to Oregon around 10 p.m. The hotel where the college crew is staying resembles The Standard - hip, no frills, modern kitschy, useless staff. Totally cool though since its location is convenient and the rate is more than r 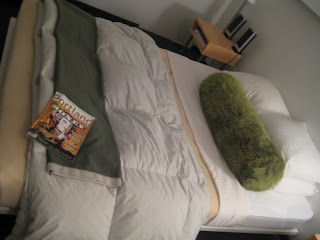 From what I saw on the plane and the airport and the hotel lobby, I realized Diabolina/Dorothy is no longer in L.A./Oz. And that I should keep the weekend's outfits casual - UBER CASUAL. No flash here :( 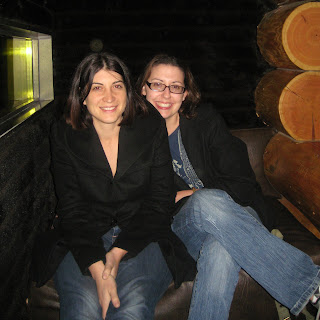 Don't change a thing about the function-over-form plane outfit when we go out for late night drinkies with The Beav, an old friend, and That Girl, a new friend who is quickly becoming a fave. 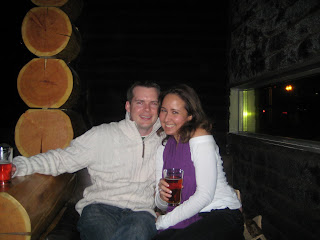 U.S. city? Me either. Hit one establishment called Union Jack's and then headed back to the hotel to the Doug Fir, a cool log cabin-y bar/restaurant that's a top music venue in P-town.

Too many drinks and laughs. Great catching up and reminiscing. Perfection of a start to the weekend. 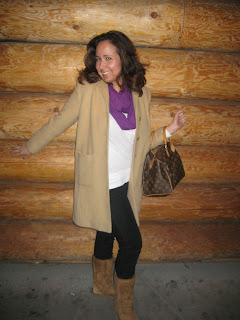 The Commentary
Feel really self-conscious when I dress down. We're talking REALLY self conscious. Know lots of friends who have the opposite problem. We're all so funny with our neuroses.

For me, not dressing up makes me feel bland, unattractive, not special. I like feeling unique. Enjoy the attention that comes with standing out in a crowd.

Only very recently have I started owning alot of my personal insecurities and fears. Alot of intense writing last year helped. So lately I've been trying to really understand what's behind personality traits I have always just taken for granted. Have been trying to assess what's healthy and what's not. 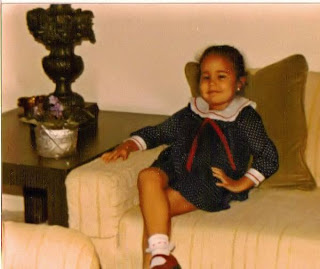 I think for me alot of who I am goes back to my childhood. Fashion was a large part of how I was raised. My mom always had me pristinely dressed up from head to toe as a child. I think as an immigrant she was really conscious of not being looked down upon, of being accepted. That and she inherently appreciates beautiful things.

I remember waking in the middle of the night several times when I was little to find her up and tirelessly sewing. She'd create these impeccable outfits for me that got complemented everywhere we'd go. I still marvel at how hard she worked to make me feel like I had everything I could ever want. She is such a gift of a parent. 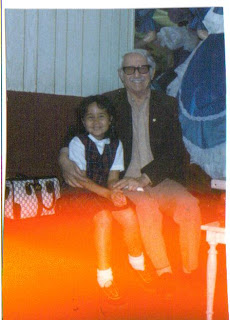 My stepdad was also a big influence. His life was fashion. He had a glamorous chain of stores that he'd built from nothing. His women's clothing stores were all over Southern California - in the Beverly Hills Hotel and South Coast Plaza and the Beverly Center.

In the 50s and 60s, he dressed all kinds of stars including Diana Ross and Marilyn Monroe. He was all about bringing out the theatrical in me, making me less shy and book-wormish, more creative and expressive. What a gift he was too. 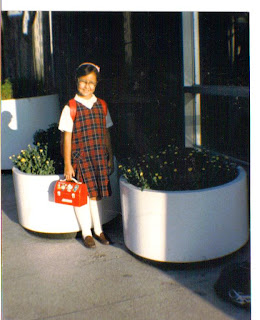 I think another part of my personal fashion puzzle is that for 12 years I went to Catholic school. Which means in addition to wearing alot of guilt, I also wore a uniform. An uncomfortable plaid uniform.

I didn't really resent it though. Didn't really understand that there was any other option. But I do remember feeling a real sense of urgency to accessorize, to make myself look different from the other little Good Shepherds. My book bag and shoes and hair accessories and jewelery were always big priorities. I saw them as ways to express my individuality. So funny to remember all that now in the context of this blog.

It's so interesting to me how fashion can represent such vastly different things to different people. It can seem so frivolous to some, so loaded with meaning to others. It can be aspirational or it can be intimidating. It can be a shield we use to protect ourselves. It can be a security blanket. 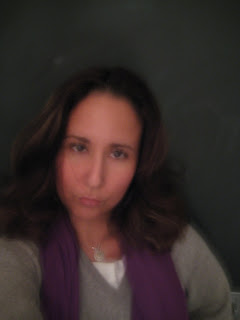 In the end, fashion is just such an integral part of who I am and how I see the world. I guess I just have to embrace it in all its neurotic glory!

I'd love to know what influences how you dress - sharing is caring ;)

OMG! I totally rocked that sailor dress back in the day. I think my mom still has it in storage - she saved most of my "fancy" clothes. I should dig it up and snap a pic :)

I am all about dressing down. I'm like your polar opposite!

Did you ever see pics from our trip to Portland last year? We did a long weekend for our anniversary. You can click "anniversary" under "labels" in the left column of my blog. :)

OMG! I had one on those navy sailorish dresses too! Cute red Mary Janes!

And I hear you on the Catholic school thing. I went to Catholic school for 12 years. And when I got to college, I had no idea what to wear. I couldn't comprehend "free dress" everyday. Now I LOVE fashion, but I'm just not fashionable. Oh well! Someday...

Wore a school uniform myself through school. Even a couple of early jobs required wearing the same thing, every single day (e.g. flight attendant.) And then, on the weekends and/or evenings, dressing becomes SO much more fun and your wardrobe is that much better & fresher since you haven't had to touch it all week.

I guess I still have a uniform today. Black clothing jazzed up with accessories. Not very creative, but sometimes the best I can do in the early mornings.

i'm all about tailored business casual at the office and when i have a nice event to attend. i tend to keep it "put together", casual, but still tailored all other times. i'm just more comfortable in pretty basic looks. and i don't know what i'd do without black in my closet. ;)

those dresses in the pics are just too adorable!

Things that influence the way I dress:

and the #1 thing that influences the way I dress...

weezermonkey,
i will look right now!!!

kfr, I hear you honey! I started this blog to FORCE myself to get away from my uniforms. Towards the end of last year I found myself wearing the same outfit like 3 days in a row. I reasoned that there was no crossover in the people who were seeing me. bad news!